In this series, we will break down one of our most popular educational pieces, "HRP Redox Reaction Driven TMB Color Development."  This white paper was written by one of ICT's founders, Dr. Brian Lee.

This post will cover part one.  Look for follow up posts in the near future to complete the series.

Despite all the interesting and useful advances in enzyme immunoassay (EIA) driven technology, a very significant percentage of the biological sample detection work is still performed using some version of the solid-phase support concept. Two of the more common-place biological sample testing formats are based upon modified solid support surfaces within ELISA plate wells or on multiple composition types of suspension bead surfaces. Much of the EIA signal generation processes involve the use of either alkaline phosphatase (ALP) or horseradish peroxidase (HRP) enzyme activity. Amongst the colorimetric signal generating formats, the HRP-enzyme + 3,3’,5,5’-tetramethylbenzidine (TMB)-substrate signal generation tandem is still the preferential option. In contrast, ALP in years past performed much better within a chemiluminescent assay framework than as a colorimetric signal generator in absorbance signal-based assay platforms. Since our focus in this technical discussion is directed at colorimetric signal generation readouts, we will devote our attention to examining the redox relationship that exists between HRP and it two substrates, hydrogen peroxide (H2O2) and TMB.

Part 1 of this technical review of key chemical interactions leading to HRP conversion of TMB to its oxidized colored product will include a summary of the physical/molecular characteristics of the three key reaction components (HRP, H2O2, and TMB) that are responsible for converting the colorless TMB starting substrate into its green oxidation state form. With respect to the HRP assay component, we’ll address several important molecular structure features that contribute to its continued utility and versatility. These structural features are the source of this enzyme’s excellent stability character and high substrate turnover rate properties. We follow up the HRP enzyme features summary with a brief overview of some past and present chromogenic HRP substrates. We attempt to provide some historical insight into the motivation factors behind the consensus move away from the once popular benzidine-based substrate dyes. It was well documented by several mutagen/carcinogen screening methods that benzidine dyes were confirmed carcinogens. This led to the synthesis of a safe benzidine substrate in the form of TMB. Closing out Part 1, we provide a cursory look at the molecular features of the oxidizing substrate H2O2. We briefly address the significance of the peroxide (peroxo) single bond oxygen to oxygen linkage with respect to its influence on the oxidative properties of this molecule.

Horseradish peroxidase (HRP) has achieved a broad degree of acceptance as a stable and efficient enzyme mediator of chromogenic substrate signal generation. This ascension to prominence was likely the result of several desirable enzyme performance attributes. It is worth mentioning however, that economic factors associated with an abundant and readily accessible supply of crude HRP extract starting material enhanced the affordability of the final highly purified HRP end-product. Sourced from a common easy to grow plant source, the horseradish plant (Armoracia rusticana), its roots provide an abundant source of the crude HRP enzyme starting material. Crude HRP enzyme extract is subsequently purified into various commercial grades of HRP enzyme product [1]. Abundant supplies of crude HRP starting material combined with the existence of efficient large scale commercial HRP purification processes, made HRP a very affordable option for chromogenic substrate signal generation.

Other contributing factors leading to broad acceptance of HRP as a reliable research and commercial assay kit signal generating enzyme include the stability properties of the enzyme, its catalytic substrate turnover rate, ease of conjugation to immunoglobulin G (IgG) or other protein/hapten, and lastly how much steric hindrance is incurred upon its conjugation to an IgG up/sandwiching antibody. With respective to the above-mentioned favorable attributes criteria, HRP conjugates demonstrate > 18 months shelf-life (2°C – 8°C) when stored in an appropriately formulated conjugate stabilizer buffer. Two such HRP conjugate stabilizer formulations include ImmunoChemistry Technologies’ (ICT’s) Neptune (Catalog # 6347) and Mammalian (Catalog # 6350) HRP conjugate stabilizer products. As an enzyme label for conjugation to analyte-specific IgG, HRP is quite amenable to the conjugation process. It can also be lyophilized in the free molecule or conjugated-to-IgG form when diluted into an appropriate lyophilization medium. Regarding the performance criteria focusing on HRP catalyzed substrate turnover rate, HRP is considered to be a high substrate turnover rate enzyme [2]. With respect to its ease of conjugation to IgG or other proteins, HRP possesses a minimal number of chemically accessible lysine groups (a total of 4 groups) that allows for a controllable (minimal crosslinking) conjugation process with another protein. Being a glycoprotein, it possesses a relatively large carbohydrate to protein mass ratio. Carbohydrate structure represents between 18% and 22% of the total mass of the HRP enzyme molecule [3, 4]. For several decades, oxidation of the HRP-carbohydrate moieties to form amine-reactive aldehyde functional groups provided a reliable coupling strategy for conjugation of HRP to other primary amino-group bearing proteins [5]. When conjugating HRP to an antigen-specific IgG, it’s relatively small (as enzymes go) molecular weight (42 kDa – 44 kDa), resulted in minimal levels of steric hindrance with respect to antibody binding site function. In contrast, conjugating larger molecular weight signal generation enzymes (e.g. alkaline phosphatase), to a same or different antigen-specific IgG stock will lead to an increased probability of antibody hypervariable binding site interference.

Selection of horseradish peroxidase as a general go-to enzyme mediator of chromogenic or chemiluminescent sourced signal generation in research and commercial venues, was essentially driven by both performance and pricing factors.

Within the multiple isozyme iterations (42 as identified by isoelectric focusing) making up the horseradish peroxidase complement of enzymes, HRP isoenzyme C (HRP-C) is the most abundant. It constitutes approximately 50% of total peroxidase enzyme from horseradish peroxidase [6]. Structurally, the HRP-C isoenzyme is a globular protein comprised of 308 amino acids plus 8 asparagine linked carbohydrate side chains [7, 8]. Early glycosylated molecular weight estimates fell between 42 kDa and 44 kDa depending upon the quantity of carbohydrate content [8]. The 308 amino acids (33,890 Da) plus a heme group (572 Da) plus two calcium ions brings the molecular weight up to the 34,542 Da value [2]. Assuming a 42,000 Da to 44,000 Da glycosylated molecular weight, the carbohydrate content would account for between 18% and 22% of the molecular mass of the HRP enzyme [1]. These carbohydrates or glycans are composed of N-acetylglucosamine, mannose, xylose, and fucose [9]. Researchers in this area have concluded that incorporation of these glycan groups confers an additional level of stability to the HRP enzyme molecule [2, 10]. Some of these enzyme stability features attributed to the glycan structures have included: 1) increased heat stability, 2) increased resistance to free-radical formation associated with the enzyme’s redox activities, 3) increased enzyme solubility in aqueous medias, and 4) creation of an increased structural rigidity feature helping to combat heat and other adverse environmental conditions [2]. These hostile environments can lead to the unfolding/denaturation of the tertiary structure of the enzyme. Using X-ray crystallography, a three-dimensional image of HRP-C was obtained [11]. This revealed an α-helical folding structure with a small section of β-sheet. HRP-C consists of two domains with a hydrophobic pocket located between them. Within the hydrophobic pocket lies the heme prosthetic group (ferriprotoporphyrin IX) whose function is to conduct the enzyme oxidation and reduction (redox) activities [2, 6, 10]. A more comprehensive explanation of heme associated redox electronics as it relates to the oxidation of 3,3’,5,5’-tetramethylbenzidine (TMB) will be provided in the final section of this technical presentation.

Early recognition of HRP as a stable and reliable oxidizing enzyme and subsequently a useful enzyme redox component for immunodiagnostic purposes, lead to the development early on of many chromogenic substrates. Each new substrate formulation was intended to provide a greater signal sensitivity than its predecessors. In Table 1, we list some of the chromogenic HRP substrates that were routinely used for HRP detection over the years. A review of past chromogenic HRP substrate publications reveals a few multiple dye comparison studies of HRP substrate dyes that were in routine use for diagnostic purposes. In one multiple oxidized dye sensitivity comparison, going from highest to lowest sensitivity, they observed the following sensitivity hierarchy: TMB > OPD > ABTS > 5AS > MBTH > AEC [12]. An earlier study comparing the detection sensitivities of the OPD, ABTS, o-dianisidine, and 4-aminoantipyrene HRP substrates found a sensitivity hierarchy consisting of OPD > ABTS > o-dianisidine > 4-aminoantipyrene [13]. Combining these published sensitivity comparisons with other published anecdotal accounts, we conclude that for the contemporary HRP chromogenic substrates, the relative detection sensitivity hierarchy would be as follows: TMB > OPD > ABTS.

Additional motivation for the derivation of newer and improved chromogenic HRP substrates arose from a desire to move away from a dependence on benzidine analog composition dyes. Benzidine is classified as a known carcinogen [14]. Its conversion to its carcinogenic form via o-hydroxylation of its aromatic amine structure by liver based oxidases was proposed by Josephy et al [15]. Peroxidase catalyzed oxidation of benzidine can lead to formation of reactive electrophiles which may facilitate its binding to DNA [14, 15]. Using Salmonella enterica serovar typhimurium TA 1538 as the reference indicator organism within an Ames testing format, several benzidine analogs were analyzed for their mutagenic potential [16]. In the presence of liver microsome sourced enzymes (oxidases) as part of an Ames testing format, benzidine and benzidine derivatives such as o-dianisidine, were found to induce frame-shift mutations in the Salmonella typhimurium TA 1538 indicator organism. In contrast, the TMB substrate did not exhibit any mutagenic properties [16]. This was the logical mindset leading to the derivation and synthesis, using 2,6-dimethylaniline as the starting material, of a benzidine derivative having all four of its o-positions blocked by a methyl group (TMB) [17]. TMB was further demonstrated to have little carcinogenic activity in rats [17]. A structural comparison of benzidine and its DAB and TMB derivatives is illustrated below in Figure 1. In 1981, Bos et al. published and promoted the use of TMB as a non-mutagenic signal generation substrate for enzyme immunoassay (EIA) formats [18]. Over subsequent years, multiple investigators put forth a substantial effort toward addressing: 1) limited TMB solubility in aqueous solution properties, 2) long term TMB substrate storage stability limitations, and 3) instability of oxidized blue-green and yellow oxidation state substrate solutions [19-21]. 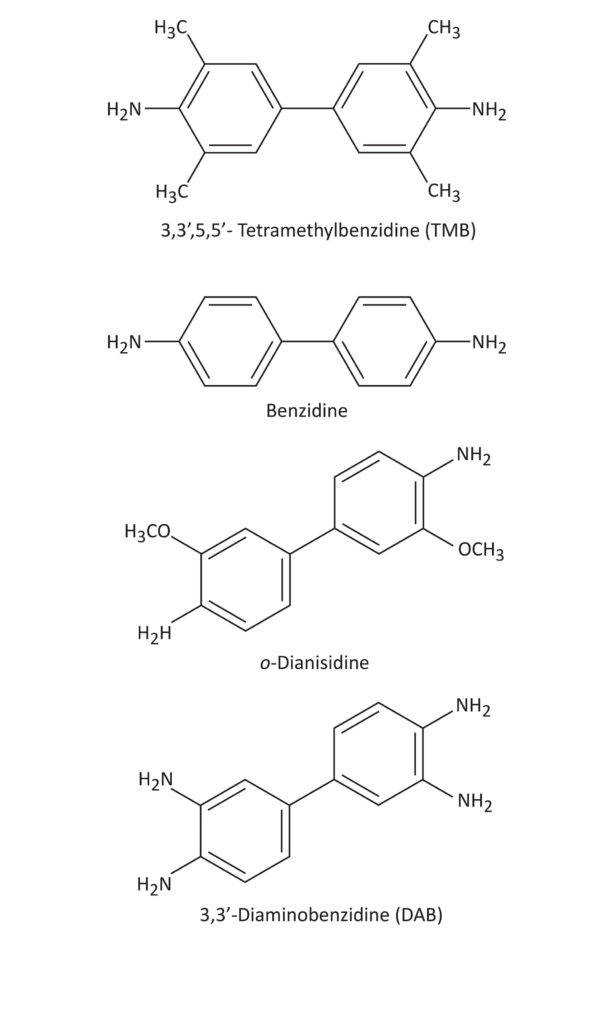 Figure 1. Chemical evolution of chromogenic benzidine based dyes leading to present day 3,3’,5,5’-Tetramethylbenzidine (TMB). TMB was the only substrate to be lack mutagenic or carcinogenic activities.

Look for Part 2 of this series to be posted soon!