Autophagy operates as a highly integrated cellular homeostasis maintenance process. Because of its centralized role as a housekeeping and cellular stress monitoring system, its operative effects within any cell type vary on a case-by-case basis. A nice example of this concept is seen when looking at autophagy’s relationship with cancer. Depending on the nature of a cancer cell-type or developmental stage of a cancer, autophagy can act either as a cancer promoter or suppressor. Christian de Duve, a Nobel Prize-winning biochemist was first credited with coming up with the name autophagy [1]. The term “Autophagy” derives from the Greek root-words auto (self) eating (phagy) due to its intracellular housekeeping actions. Like apoptosis, autophagy is a genetically controlled/evolutionarily conserved programmed cell death process. Autophagy is most commonly known for its cell survival actions; enabling cell survival during nutrient deprivation conditions. In a broader sense, autophagy serves the critical role of helping cells weather extended periods of a wide range of physiological stress conditions. Some of the more well-known stressors include nutrient deprivation, metabolism related stressors such as ROS production, hypoxia, and anti-cancer treatment protocols.

Autophagy is reliant upon the assembly of an intracellular membrane enclosure structure through which expendable damaged or aging intracellular components can be gathered up for autolysosome processing. Currently, three different forms of autophagy have been identified and differentiated by the means in which the captured cytosol content is presented to the lysosome [2]. These three forms have been classified as: 1) macroautophagy, 2) microautophagy, and 3) chaperone-mediated autophagy. Macroautophagy, the most abundant and well-studied form of autophagy, is usually referred to simply as autophagy in the published literature. Autophagosome assembly involves a multi-step assembly process (Figure 1). It begins with the creation of an isolation membrane or autophagophore. Autophagophores are nucleated at an endoplasmic reticulum (ER) -emanating membrane domain enriched for the lipid phosphatidylinositol 3-phosphate (PI3P), known as the omegasome [3, 4]. Complete encirclement of this structure with captured cytosolic content leads to the formation of an autophagosome. This lipid bilayer enclosed structure can merge (fuse) with an enzyme laden lysosome forming an autolysosome. Incorporation of lysosome-origin hydrolases facilitates the breakdown of the autolysosomal cargo, completing the component recycling process [5].

There are two types of autophagy: ongoing basal level autophagy and inducible autophagy [6]. Basal level autophagy is a constitutive housekeeping process for removal of outdated or defective cellular or organelle components. Inducible autophagy acts as the cell’s response to various types of stressors. Some of these stress-factors include nutrient or cell energy deficiencies, oxidative stress, hypoxia, or from a cancer treatment perspective, cytotoxic stress emanating from chemotherapy. Inducible types of autophagy can be further broken down into selective and non-selective autophagic targeting [7]. In the case of non-selective autophagy, the main purpose is harvesting a generic spectrum of intracellular cytoplasm and organelle component content for the purpose of sustaining metabolic activities to include energy production. In contrast, selective forms of autophagy target specific intracellular organelle or membrane-protein structure. Autophagy action using this more precise selective process provides the cell with a means by which to limit organelle removal to organelles that are damaged beyond normal function [8]. Although the targeting action involves some form of ubiquitination process, the actual signaling stimulus seems to vary with the organelle involved [8]. Ubiquitin tagging of protein targets allows them to be identified and bound by autophagy receptors with the aid of LC3/Atg8 for incorporation into autophagosomes [8, 9]. Autophagic flux is a general term used to define the rate of autophagosome-mediated intracellular degradation activity in response to or associated with a particular physiological situation [10].

Over the past decade, much has been learned about the intricate mechanisms by which autophagy is regulated. mTOR (mechanistic target of rapamycin), an evolutionarily conserved serine/threonine kinase, acts as a central regulator of cellular anabolic and catabolic processes. These include monitoring signals emanating from both intracellular and extracellular locations [11]. Named for its sensitivity to the anti-cancer agent, rapamycin, this nutrient-sensing kinase, is central to controlling the autophagy initiation process. mTOR exists as two different biologically active forms: mTORC1 and mTORC2 [12]. Each form represents a distinct multiprotein complex having different regulatory activities [13]. mTORC1 is involved in the direction of cellular proliferation whereas the less clearly understood mTORC2 seems to have cell survival and cytoskeletal organization directives [14]. Using the often-used nutrient depletion response example, during nutrient depletion conditions, mTORC1 activity is inhibited. mTORC1 inhibition leads to unc-51-like kinase 1 (ULK) dephosphorylation and subsequent activation [15]. ULK1 activation serves as a positive regulator of autophagosome formation [9]. mTORC1 is regulated by AMP-activated protein kinase (AMPK). Inhibition of mTORC1 with increased AMPK activity leads to an increase in the autophagic process [16]. In times of nutrient abundance, mTORC1 freely binds to and phosphorylates ULK1, interfering with its ability to bind with AMP-activated protein kinase (AMPK), leading to autophagy inhibition.

Autophagy’s central role in regulating and maintaining cellular homeostasis portends its involvement in the control of a broad range of mission-critical cellular functions. Logic would then dictate that any performance defect within autophagy’s wide-ranging activity functions would manifest itself across a broad range of human diseases states [17]. Thus, an initial belief that autophagy’s main function was to act as a nutrient deficit mediating cell-survival mechanism during nutrient deprivation cycles was grossly incomplete. Because of our interest in limiting our discussion to the general mechanisms propelling the autophagic processes, along with the role autophagy plays in cancer treatment, we limited our autophagy-defect pathologies to the more prominent autophagy-origin diseases. Some of these include neurodegenerative diseases, heart disease, autoimmune/inflammatory driven pathologies (inflammatory bowel diseases, Crohn’s disease, diabetes, obesity, lupus), and cancer [17, 18].

Autophagy as a Cancer Agonist / Antagonist

Autophagy as a Cancer Antagonist
When reviewing current autophagy publications, much attention has been given to its role in controlling the onset and expansion of human cancer. How much of an active role does autophagy play in disease onset and progression? As briefly stated in the introduction, autophagy plays dual and conflicting roles as both an advanced-stage-cancer survival promoter as well as an early-stage-cancer formation suppressor. As an early cancer cell genesis suppressor, autophagy’s basal level housekeeping function proactively prevents the creation of mutagenic intracellular environments favorable to new cancer cell genesis. Autophagosomes effect the removal and hydrolysis of damaged mitochondria, misfolded proteins, and protein-aggregates which if left untended can lead to harmful ROS production [19]. ROS-associated DNA damage, leading to mutation driven genetic instability, is fertile ground for cancer cell genesis. Autophagy’s housekeeping activities efficiently remove potentially harmful cytosolic debris in a multistep process (Figure 1) [6, 20].

Targeting Autophagy as an Additional Tool for Cancer Treatment

Targeting autophagy inhibition as a strategy for improving chemotherapy treatment outcomes arose from well-documented evidence implicating an active/functional autophagy system with greatly enhanced survivability of all stages of cancer. As stated in the prior section above, autophagy is known to be responsible for MDR following extensive chemotherapy procedures. By its very nature as a genetically conserved cell survival mechanism, it provides an opportunity for improved cancer cell viability within harsh environmental conditions (nutrient deficiency, hypoxic conditions) known to occur within the microenvironment of solid tumor cell expansion. Enabling metastatic tumor cells to survive in new and potentially hostile microenvironments gives autophagy a central role in tumor invasion and metastasis [23]. Autophagy also provides opportunities for cancer cell transformation into a dormancy state. Cancer cell dormancy opens the door for future resurrection and metastasis once chemotherapy treatments have ceased. Unfortunately, a false sense of security arising from treatment-associated cancer cell/tumor reduction can give the impression that the cancer battle has been won. Too often, however, dormant stage cancer cell populations surge back with a renewed vengeance once the chemo-treatments have concluded! So, suffice to say that there is ample justification for seeking out a pharmaceutical autophagy inhibitor(s) solution to be used as a standalone treatment or in tandem with chemotherapeutic agents.

Prior to their use as autophagy inhibitors, CQ and HCQ were used as anti-malaria and anti-inflammatory mediating agents [25]. Presently, CQ and HCQ show evidence of enhancing effectiveness of chemotherapy treatment. Autophagy inhibition makes tumor cells more sensitive to chemotherapy agents. CQ and HCQ demonstrate autophagic-flux blocking properties [26]. When we state that HCQ and CQ block autophagic flux processes, we imply that they inhibit autophagic degradation processes. Consensus opinion concludes that they inhibit autophagy by interfering with lysosomal fusion with sequestered cargo within autophagosomal bodies [27]. A major criticism of the CQ and HCQ autophagy inhibitors is their lack of autophagy suppression potency [28]. To remedy CQ potency issues, dimeric analogs of CQ were synthesized leading to more potent autophagy inhibitor molecules, Lys01 and Lys05 (Figure 3) [29]. 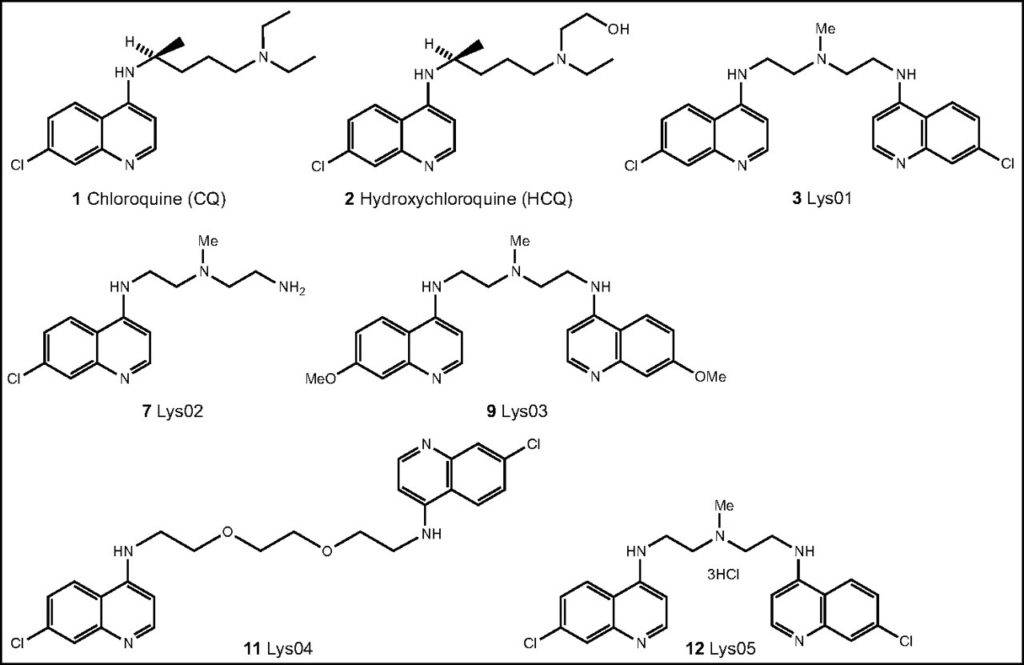 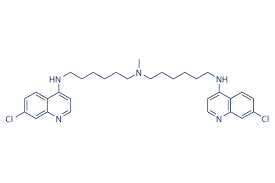 For the sake of transparency, multiple other small molecule driven autophagy inhibitors are being evaluated for their autophagy inhibition and anti-cancer efficacy properties. Suffice to say, because of autophagy’s strategic role in the expansion and resilience of cancer, great emphasis will continue to be placed on advancing this clinical cancer research agenda.

Early impressions of autophagy’s role as a cell survival mechanism during nutrient deficiency has evolved over the past fifteen-plus years, subsequently assigning autophagy a central role in a wide range of physiological activities. This includes significant roles in developmental processes, including organ development. Autophagy continues to be recognized for its important role as a centralized cellular stress response mechanism. By providing cells with a means of extending available intracellular resources by recycling non-essential or outdated cellular components, acquisition of an operational autophagy process played a critical in the evolution of higher life forms. Recycling intracellular components enables the continued production of energy supplies without which life cannot exist.

Unfortunately, a negative consequence of autophagic processes lies in their actions to promote the growth of human cancer. In addition to providing cancer cells with a means of surviving nutrient deficiencies, autophagy also provides a means by which fast growing tumor cells, in need of additional energy resources, can sustain their rapid growth rates. In addition, the acquisition of MDR phenotypes in cancer cells can also be attributed to autophagy. Together these autophagy-associated attributes make the battle against human cancers a much more challenging undertaking.