Back to Basics: What is an Immunoassay?

What is an immunoassay or ELISA?

Immunoassays are quick and accurate tests that can be used on-site and in the laboratory to detect specific molecules. Immunoassays rely on the inherent ability of an antibody to bind to the specific structure of a molecule. Antibodies are proteins generated by animals in response to the invasion of a foreign molecule (antigen) into the body. Antibodies are found in blood and tissue fluids and will bind to the antigen whenever it is encountered. Because antibodies are developed to the specific three-dimensional structure of an antigen, or analyte, they are highly specific and will bind only to that structure. Once purified from the blood, monoclonal and polyclonal antibodies are ideal assay reagents to detect and monitor specific target molecules with limited interferences from other substances. Four typical ELISA formats are: antibody sandwich immunoassays, antigen-down immunoassays, competitive inhibition assays, and rapid assays. 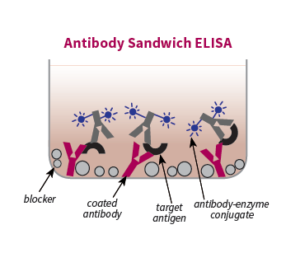 In an antigen-down (immunity test) immunoassay, the analyte is coated used to bind antibodies found in a sample. When the sample is added (such as human serum), the antigen on the plate is bound by antibodies (IgE for example) from the sample, which are then retained in the well. A species-specific antibody (anti-human IgE for example) labeled with HRP is added next, which binds to the antibody bound to the antigen on the plate. The higher the signal, the more antibodies there are in the sample. Antigen-down (immunity test) assays can be configured as rapid tests and are often used to diagnose allergy conditions – routinely a patient’s blood is tested against different allergens to see if the person has antibodies to that allergen. 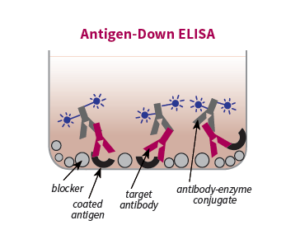 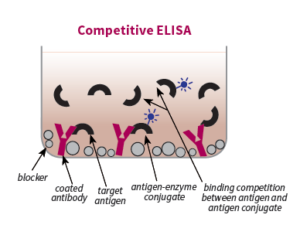 In addition to microtiter plates, immunoassays are also configured as rapid tests, such as a home pregnancy test. Like microtiter plate assays, rapid tests use antibodies to react with antigens and can be developed as MoAb-PoAb sandwich formats, competitive inhibition formats, and antigen-down formats. With a rapid test, the antibody and antigen reagents are bound to porous membranes, which react with positive samples while channeling excess fluids to a non-reactive part of the membrane. Rapid immunoassays commonly come in 2 configurations: a lateral flow test where the sample is simply placed in a well and the results are read immediately; and a flow through system, which requires placing the sample in a well, washing the well, and then finally adding an analytecolloidal gold conjugate and the result is read after a few minutes. One sample is tested per strip or cassette. Because rapid tests are faster than microtiter plate assays, require little sample processing, are often cheaper, and generate yes/no answers without using an instrument, they are often used in the field by non-laboratory people testing whole samples. However, rapid immunoassays are not as sensitive nor can they be used to accurately quantitate an analyte (Self-monitoring of blood glucose levels by diabetics is considered quantitative rapid testing, however, immunoassay technology is not used for these tests). All rapid immunoassay tests can be converted to a microtiter plate assay, but not all microtiter plate assays can be converted to a rapid test. 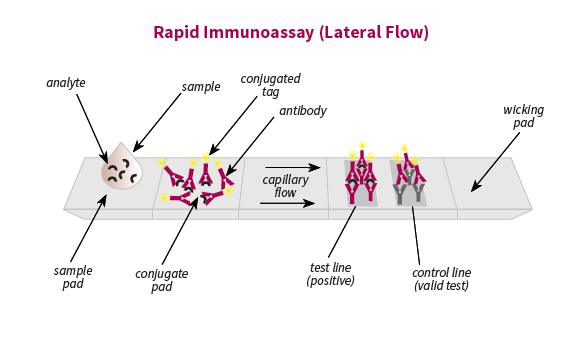